“Tenth Incarnation is the most profound, prophetic and powerful book of poetry
written in the English language.” 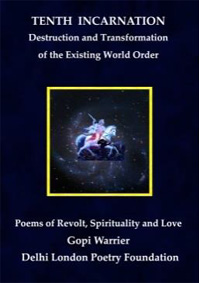 I have known Gopi Warrier as a friend and colleague for over 35 years and it is a considerable privilege to be asked to write this foreword to his latest book of poems with the uncompromising subtitle: “The Destruction and Transformation of the Existing World Order”.

The Tenth Incarnation of Vishnu referred to in the title is none other than Kalki who incarnates during the Kali Yuga or Iron Age in which we are now living to redeem and save those that are worthy. The Kali Yuga in Indian Philosophy is the last in the cycle of Yugas and is the one during which virtue degenerates and rulers plunder and destroy other countries.

This is a world where we literally cannot see the wood from the trees. We are totally confused by the potent effects of ‘Maya’ the illusory sensate world of pleasure seeking and gadgets, unwilling to recognize that much of the cultural land and political infrastructure we cling to is now toxic in nature and the cause of our downfall.

If it is the duty of an artist to selflessly and bravely direct humanity toward the firm ground of truth and love, then this work is a prime example.

Tenth Incarnation takes issue with a number of taboos, pointing out the corrosive influence of the Monarchy, the flaws in Christianity and the degeneration of art into shock tactics and sleaze. His poem to Obama written before the result of the US 2012 election was known, is a generous tribute to a leader faced with Christian fanatics all praying for him to fail (and probably worse):

“It is now a war between Hanuman
the Wind God rooting for you and the bone-gods shooting you,
let’s hope the Wind God wins it for you.
After all He gave you that storm”.

I believe this book of poems as well as others by Gopi can help to influence people toward the true purpose of life, long acknowledged in both Western and Eastern philosophy, which is to attain self-realisation and liberation while acting selflessly for the benefit of humanity.
Even if only a handful of people are assisted to set out on this path, it will have achieved its purpose.

David McAlpine, Publisher, Delhi London Poetry Foundation
David McAlpine is the author of “Crucifiction”. He has lived all over the world particularly in Europe and South America, as his father was a senior British diplomat.
He is a scion of the McAlpine Construction Company in the UK.